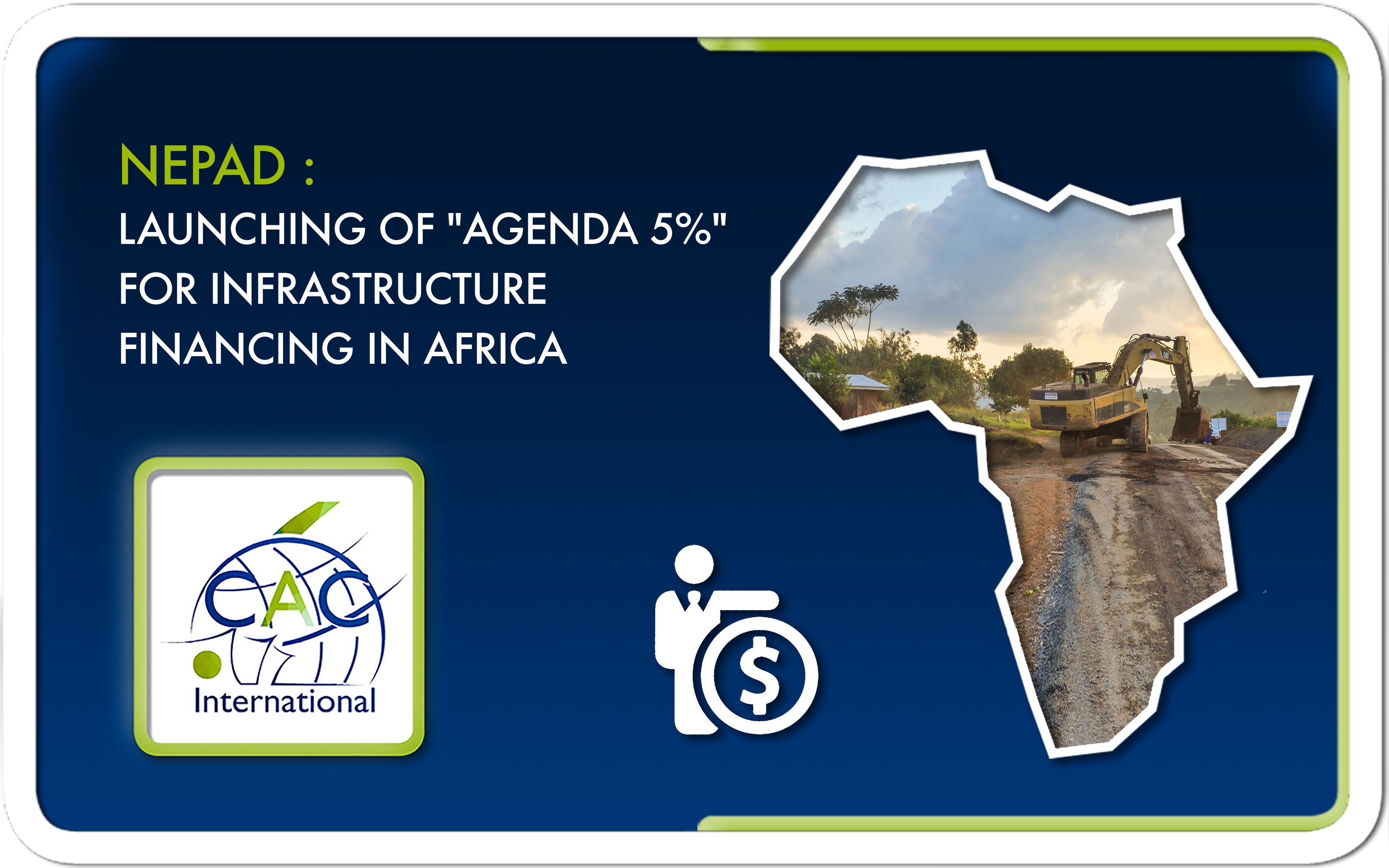 The New Partnership for Africa’s Development (NEPAD) – the African Union’s Economic Development Program – met today at the NASDAQ Stock Market in New York, international investors and top business executives, for the official launch of its 5% Agenda.

This launch takes place five years after an African Union Summit (January 2012) adopted the Infrastructure Development Program in Africa (PIDA) with its 51 cross-border infrastructure programs and more than 400 projects to be implemented in four priority sectors.

According to the World Bank, the African continent has to spend $ 93 billion a year (44% for energy, 23% for water and sanitation, 20% for transport, 10% for ICTs and 3% for irrigation) by 2020 to fill its lack of infrastructure. At present, this deficit costs the continent each year the equivalent of two points of GDP growth. On the other hand, Africa has only succeeded in closing 158 financing projects during the decade 2004-2013 with a debt of $ 59 billion, which represents only 5% of the investment needs in infrastructure and 12% of actual financial flows.

The Agenda 5% campaign recalls that only a collaborative approach involving both public and private actors can provide effective solutions to these problems and calls on institutional investors to increase their funding in infrastructure in order to achieve the stated objective of 5 %.

Speaking at the launch event in New York, Ibrahim Assane Mayaki, Executive Secretary of NEPAD, commented: « Infrastructure plays a key role in the continent’s growth. At the same time, they can represent an innovative and attractive asset class for long-term institutional investors. « By launching the Agenda 5% campaign in New York today, we are inviting investors to take advantage of Africa’s tremendous opportunities and move forward in what can only be a win-win partnership. »

The launch of the campaign brought together top international investors as well as CEOs and business leaders, including the PIDA Continental Business Network (CBN), a NEPAD-led network and a platform for Dialogue dedicated to the infrastructure sector for private sector leaders.

Tony O. Elumelu, one of the most prominent entrepreneurs in Africa and an active member of the CBN, said: « Every day, Africa is becoming stronger, with new business opportunities and innovative ideas . What is lacking in the continent today is the implementation of projects. A coherent and coordinated approach is therefore needed to mobilize institutional investors while limiting their exposure to risks. African governments must create enabling environments to attract these investments that are so important to the continent’s growth and development.  »

According to a 2016 McKinsey report, institutional investors and banks would have $ 120 trillion in assets, some of which could support infrastructure projects in Africa.

Today, more than ever, the continent must exploit this potential. At a time when banks are faced with additional regulatory challenges and governments have limited budgetary space, it is becoming increasingly urgent to release additional flows from long-term institutional investors such as insurers, pension funds and sovereign wealth funds.

In view of the investment of pension funds and sovereign wealth funds in large-scale infrastructure projects in Africa, many issues must be treated in order to facilitate strategically long-term resource allocation. The first of these is the need to reform the national and regional regulatory frameworks that guide institutional investment in Africa. Similarly, it is necessary to develop new products in the capital market that can effectively reduce the credit risk and thereby enable holders of African assets to allocate funding for African infrastructure in the form of of their portfolio assets.

All these issues are at the heart of the roadmap of the Agenda 5% which is the backbone of the NEPAD campaign and whose expected results include: