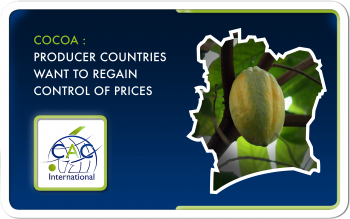 Gathered in Abidjan on Monday, when the International Cocoa Organization hanged its new headquarters after 44 years in London, the world’s largest producers of cocoa beans are committed to coordinating their volumes and finding new outlets for sales.

The impact of the sharp fall of 30% in world cocoa prices (at $ 1,834 per ton on April 25th, 2017 in London versus $ 3,390 at its highest on December 4th) brought the producer countries together in order to elaborate strategies to reverse the trend.

They all met in Abidjan on Monday for a high-level meeting, on the sidelines of the official inauguration of the headquarters of the International Cocoa Organization (Icco) , six resolutions, the most important of which was not disclosed, sanctioned their talks.

“We have agreed on production, and we will have to promote more local processing and consumption. We will also have to look towards emerging markets, “said Luis Valverde, chairman of Icco.

Several African countries were obviously present among the producing countries represented at the crisis meeting in Abidjan on Monday April 24th, the continent contributing 73% to the world cocoa bean production in 2014 according to the Icco. Cameroon, Côte d’Ivoire, Ghana, Nigeria and Togo have made a commitment to increase their influence on prices to avoid having to suffer painful repercussions.

Like those that are currently plaguing their economies. Côte d’Ivoire, the world’s largest producer, estimates its losses of tax revenues at 300 billion CFA francs (457 million euros) and Alassane Ouattara announced last Thursday a 10% decline in investment spending by the state.

Similarly, Ghana, the world’s second largest producer, estimates that it has lost about $ 1 billion in export earnings. Ghana and Cote d’Ivoire had, last week, announced their intention to set up a bilateral committee on production and prices.

600,000 families affected by the drop in prices in Cameroon.

In Cameroon, no less than 600,000 families dependent on the production of cocoa beans are affected by the drop in prices, said Luc Magloire Mbarga Atangana, the Cameroonian Minister of Commerce, Abidjan.

In Abidjan, even though the strategy was not formally posted, the producer countries showed their willingness to act in synergy against the control of the consuming countries, especially on stocks, which they hold by their overwhelming majority. While the producer countries retain only a marginal quantity. This leaves them little flexibiity to choose the date on which they wish to sell.