Cameroon – SIGIPES II, a major project entrusted by the State to CAC

Cameroon – SIGIPES II, a major project entrusted by the State to CAC 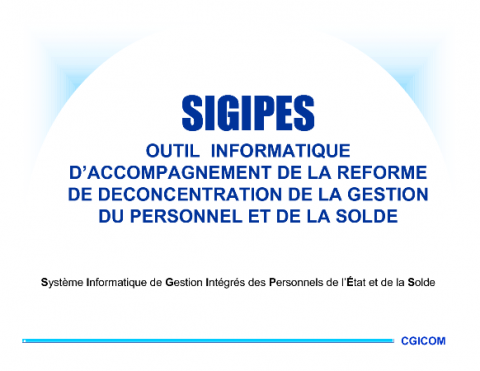 In 2016, the State of Cameroon will have a new integrated application to manage its human resources and its pay. Funded by the European Union, the project implemented by Cameroun Audit Conseil / CBL Consulting is jointly managed by the Ministry of Finance and the Ministry of Civil Service and Administrative Reform.

Called SIGIPES II, the project was launched on 12 March 2014 in Yaoundé, in the framework of an official ceremony. The majority of the participants were selected from among senior executives in the Cameroonian public administration and public finance management. The government was represented at the ceremony by Finance Minister Alamine Ousmane Mey and Minister of Public Service and Administrative Reform, Michel Ange Angouing. The European Union which finances the project was represented by Françoise Collet, her ambassador to the Republic of Cameroon.

Planned for a total of 24 months, the SIGIPES II project will give rise to a new computerized system for integrated management of state and payroll staff, which will have only one common feature with the application currently in use : The homonymy. To date, the State of Cameroon is jointly using the SIGIPES and ANTILOPE applications (National application for computer processing and logistics of State personnel), to manage the careers, pay and pensions of Cameroonian civil servants. It is expected that SIGIPES II will be conceived as a unique platform for managing the human capital of the State of Cameroon.

Highly secure, flexible, truly integrated, capable of ensuring both career and financial applications, and able to take charge of all administrations and decentralized structures, SIGIPES II will correct the limitations of the current system, among which the inconsistency of the references between SIGIPES I and ANTILOPE, the inconsistency of the data which sometimes leads to multiple registrations.