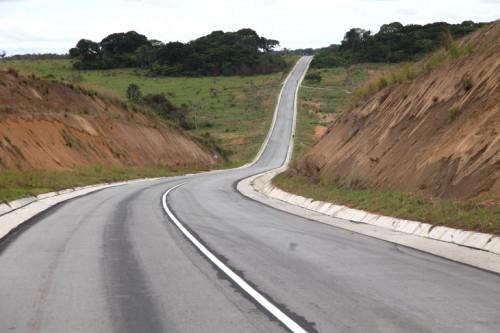 (Investing in Cameroon) – The possibility of financing the construction of the Olounou-Oveng-Gabon border road in the Southern region by Italian partners is undoubtedly one of the immediate benefits of the State visit by Paul Biya from March 20th to the 22nd, 2017 in Italy.

According to the Minister of Public Works (Mintp), Emmanuel Nganou Djoumessi, several Italian businessmen have expressed interest in the above-mentioned axis. To this end, a mission led by the Director General of Seas, Andrea Bruschide, will stay in Cameroon from March 31st, 2017, to carry out an inspection visit of the itinerary, the object of this attention.

The Olounou-Oveng-Frontière route is divided into two lots, the first of which is Olounou-Oveng, with a linear length of 70 kilometers, is currently the subject of a contract awarded to a technical office for carrying out the relevant studies. Technical studies on the second batch, the 38-kilometer Oveng-Frontière Gabon, were initiated by the Directorate-General for Technical Studies of the Ministry of Public Works.

It is therefore a total of 108 kilometers with the construction of a bridge 100 meters on the river Kom which interest the Italian partners who also mentioned the possibility of carrying out actions on the road Ebolowa- Akom II-Kribi.

The ties between Cameroon and Italy in the field of building and public works were initiated in Yaoundé in February 2017, in the margins of the Cameroon-Italy forum, during which a memorandum of understanding was signed between the Mintp and Mario Giron, vice – Minister of Foreign Affairs in charge of Cooperation (Italy). The agreement stipulates that the Italian companies Seas, Italfer and the Leonardo Group will undertake a road from the city of Oveng in southern Cameroon to the border with Gabon.

The project will last for12 months, at the end of which the Italian companies will turn out a modern road with the most advanced safety systems and the customs posts that the Italians also build.